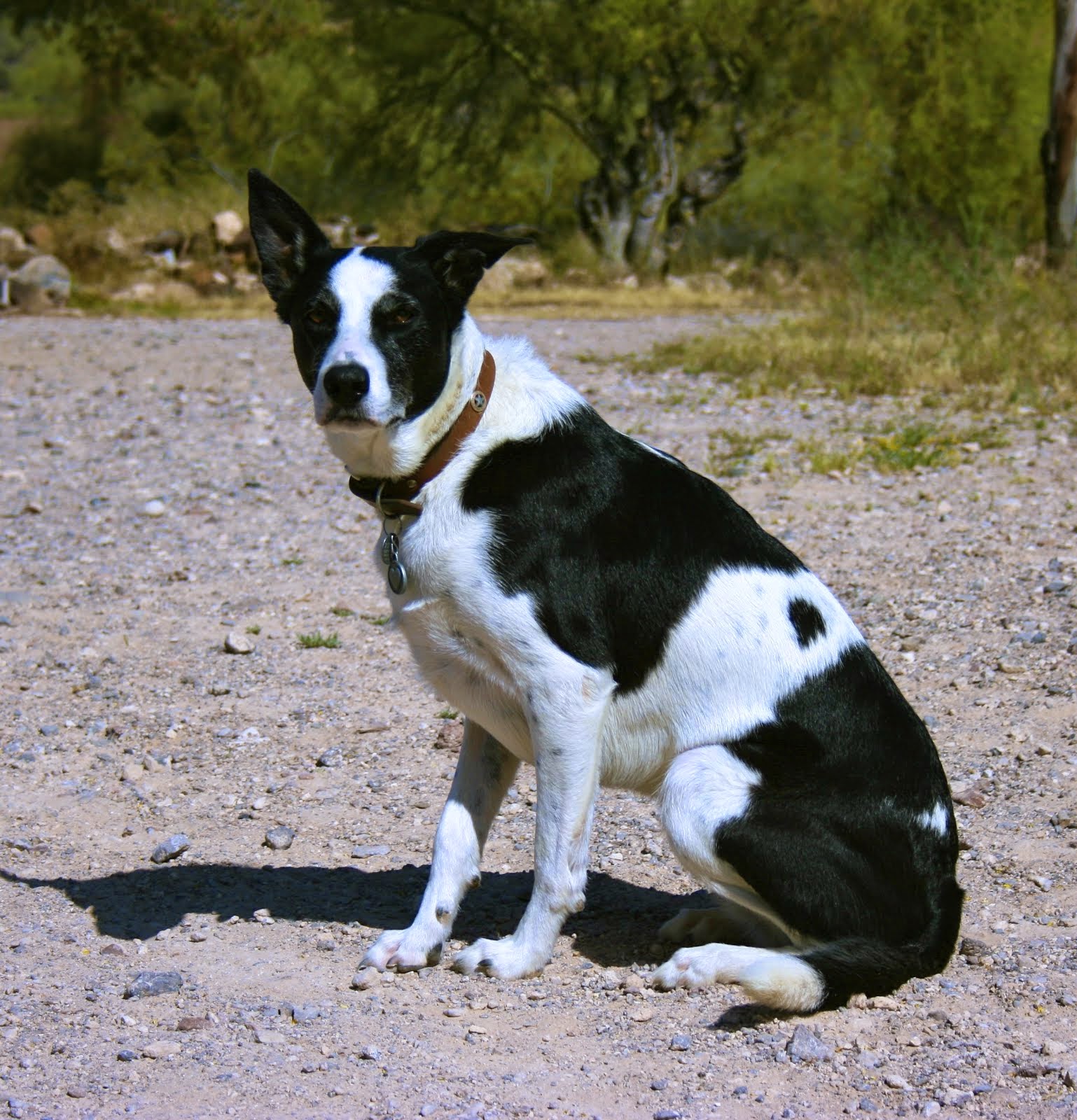 Oh, fair reader, I know you've missed our Molly McNab updates. Forgive me, for I've been preoccupied playing with a very rambunctious, smart, and oh-so-sweet six-month-old bundle of happiness.  We call her "Jolly Molly" for the sheer joy that radiates from her sleek black-and-white self.  Whatever she is doing, even when she's being scolded, she is exuberant.

I hate to say it, but I enjoy her naughtiness try as much as her occasional good behavior.  She's so … happy. She barks at the horses and tries to herd them with every happy ounce of her being.  She gets too warm in the Arizona sun and she throws herself down into the muddiest, coolest place she can find. When I scold her -- and there are times -- she grins, ears down, and wiggles to me in the happiest act of contrition she can manage. She loves it, I think, when I tell her "bad dog."  That's when she's at her wiggliest.  She works her way into my arms and licks my face with special enthusiasm.  She's my bad, bad, good, sweet dog.

And how is she naughty?  Let me count the ways.  She loves to attack William the cat.  Lovingly and playfully, of course, but unaware of the fact she outweighs him by 30+ pounds.  She wrestles with him and gnaws on his neck until his beautiful, rabbit-like coat is pasted together with puppy-slobber.  She harasses Froggy relentlessly; sensitive, temperamental red-headed ginger-cat Froggy.  Froggy takes the high ground and bats at Molly's grinning face. They've come to quite the understanding, those two.

She acts out as when I leave without her. She empties the few wastebaskets that don't have hinged lids and she shreds the dried out teabags I've invariably left in the office trash. She drags dirty clothes out of the hamper in the closet and stores them in a proud collection of her favorite things, kept on a leather cushion in the living room.  There, we retrieve our shoes, shorts, the cat's collar -- whatever we can't find in its proper place. She doesn't (with a notable exception) chew them up; she collects.

The exception?  Last week I had just opened a new tube of Burt's Bees chocolate-blueberry lip balm. (It's even more wonderful than it sounds.) I stuck it in the pocket of my work shorts and, when I dressed to go out, tossed shorts in the hamper. When I got home, I could smell it:  chocolate-blueberry wafting through the bedroom.  Molly had chewed "through" the pocket and crushed the lip balm without ever ripping the shorts.  Could I blame her?  Chocolate-blueberry! Who could resist?

She licks my face like I've smeared a liver masque on myself.  She loves to give almost frenzied kisses. I laugh or say, "No, enough!" which only accelerates the speed-of-lick. I don't care about dog germs. I love it when my dogs lick my face. Maybe in my next 50 years it'll kill me. What a way to go!

She's relatively vocal. Unlike our McNab Earl, Molly is a yipper-snapper.  She barks in excitement as we go out to do chores. She barks when she herds the horses. She makes countless varieties of noises as she and Earl play tug-of-war with the tiger-ring toy. She barks when someone drives up the drive -- that's a good thing, by the way.

She puts her paws on the edge of the kitchen island and watches us as we cook, eat, or work on the iPad. I have never had a puppy so heathen. Yet it's because she's such a joy, we have willingly abandoned nearly all rules. We love that our dogs are dogs and our cats are cats (when the dogs and cats aren't being human and when the cats aren't being dogs). We let them get away with things and we watch them in the act and look at each other, my husband and I, and we laugh.

And in the ways it matters, she's perfect. She won't leave the property. She comes when we call her. She loves the cats and she loves her older brother Earl. She is reliably good-natured. She won't chase the cottontails or bark at the chickens. She's physically tough, has endless energy, and her antics amuse us more than "formal" entertainment ever could.  She's a wildly histrionic actress; when we tell her, "Bang! Bang!" or make a finger-gun gesture at her, she throws herself over like a character actor in a B-grade western, lies still for a minute and then pops her head up at us to make sure we were watching.

Most of all, her happiness is as contagious as Ebola. She brings such enthusiasm to all she does. Who can help but get caught up in her games of keep-away and tag? Who can't laugh to see her barking at the horses, her nose inches from theirs?

There was a time when I thought dogs should be trained to the point they were not disruptive. Now, I love having my dogs disrupt my life. It's rewarding to see them express themselves as dogs, not as sterile, submissive furry robots.

Go ahead, Molly, steal my shoe. Do be gentle with the kitties, though. We love them, too.